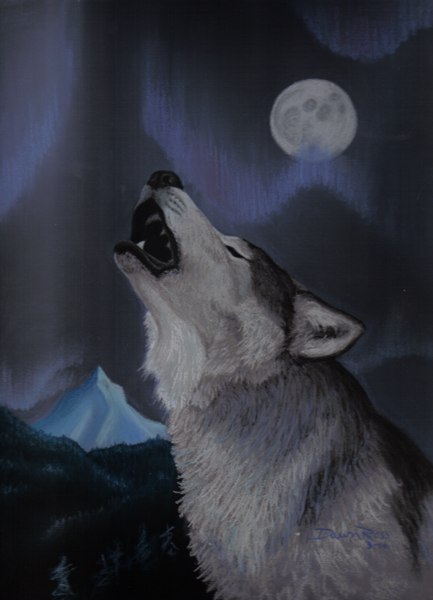 “Song of the North”
A mythical story of the Wolf and Sky, inspired by Native American legends.
(Facts on wolves to follow)
Story and art by D.R. Ross
© February, 2008

In a time long ago when the earth was new and the land was still dark, a mysterious shadow lurked in the mountainous woodlands.  He was all alone, an enigmatic creature searching for his place in the world.  The land was cool but his coat was thick.  His snout was long and his nose sensitive to the fresh clean scent of the forest.  His ears were tall and pointed, enabling him to hear the wind whispering through the trees.  But no other sounds came to him as he prowled the night.  His golden-yellow eyes were still useless in this very dark world for there was no light to see by.

He called himself Wolf, though how he came by this name he knew not.  No mother or father brought him into this world.  He simply came into being.  He was all alone as he traveled over desolate mountains and across cold icy rivers.  As the eternal night wore on and on, he searched in hope for other beasts.

When Wolf came upon the tallest and oldest mountain, he asked Mountain if it had seen any other creatures pass its way.  But Mountain remained silent.  So Wolf asked Wind, but Wind spoke too softly for Wolf to hear.  Wolf continued his journey until one long and lonely night he came upon River.  Wolf asked River if any beasts ever drank from its waters, but River sang in words that Wolf did not understand.  Wolf even asked Tree and Stone, but none could give him the answer he sought.

When Wolf emerged from the forest, he found himself upon a tall precipice overlooking the land.  But the land was just as empty as the forest had been.  Wolf sat down in despondency and hung his head down low.  A hollow sadness crept over him.  Loneliness began to crush his spirited soul.

With a swell of emotion, Wolf looked up into the dark barren sky and began to sing a slow and mournful song.  So moving was this song that Sky began to wake from its long empty sleep.  As Wolf sang of his desire for companionship, Sky became overwhelmed with pity.  It shared the solitude of Wolf but knew not what to do.  So with the same heartbreaking sentiments, Sky began to weep.

Then something miraculous began to take place.  An eternal and infinite entity such as Sky does not cry ordinary tears.  Its tears are full of magic.  As its tears fell, some turned into points of light in the sky and some settled onto the land, igniting into a spark of life.

Slowly, the song of Wolf grew to its climax.  And in the final moment of anguish, Sky released one last giant tear.  This tear became the moon.  The moon was so bright that Wolf ended his song in wonder.  With the help of the moon, Wolf’s golden-yellow eyes were finally able to penetrate the darkness.  And what he saw was even more amazing than the sight of the moon.

Wolf was no longer alone.  The sparks of life given by Sky had become other creatures.  All around him were other wolves who began to sing their songs of joy.  Wolf grinned with delight as one by one his brothers greeted him.  No longer was Wolf alone.  His heart filled with delight as he and his brothers sang, danced, and played.

Sky, too, realized that it was no longer alone.  The stars and moon became its companions and together they watched the celebrations of the wolf pack.  With a happiness of its own, Sky also began to dance.  The magic of its dance created another magical entity.  Waves of color ignited in the wake of Sky’s dance.  Today we call this dance of light Aurora.

So if you ever travel to the north where half the year is shrouded in darkness, just remember the myth of Wolf and Sky and how their sadness eventually turned into joy.  Gaze upon the moon and stars and listen to the wolves sing them their praises.  And watch Aurora with gladness as she dances to the Song of the North.