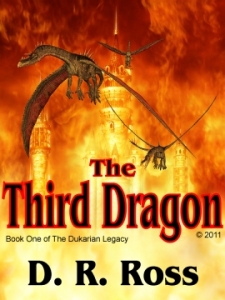 "The Third Dragon: Book One of the Dukarian Legacy" by Dawn Ross

CreateSpace.com has a step-by-step process which is relatively easy to follow. However, it is time consuming. I already had the fantasy novel ready in word, but I had to tweak the pages so that the front and back matter was in order. I also had to add page breaks after each chapter so that the new chapters started on their own pages. I tried to add a map of the fabled land of Ungal, but this never turned out right.

The fantasy novel book cover was probably the most difficult. CreateSpace.com makes it easy to create your own book cover, but I wanted my own design. To have the design completely my own, I would have to download the back cover, spine, and front cover all as one .pdf document. This meant that I had to get the measurements exactly right. Since the spine is a variable, I had to calculate the spine width based on the number of pages in the fantasy novel. CreateSpace.com gives the formula, but it was still difficult to get it exact on my program.

The next difficulty in creating the book cover this way was getting the .jpg converted into .pdf. Every time I did it, the image got skewed. After over an hour of designing and trying to convert the file, I finally gave up and used CreateSpace.com’s templates instead. This allowed me to download my .jpg images, but now I had to separate the back cover, front cover, and spine. Unfortunately, the spine on the templates was generic, so I could not use my own spine design. But at least I finally got the fantasy novel cover front and back the way I wanted it.

Have you ever noticed how almost every fantasy novel has some religious order or religious element in it? Is it because we consider religion as a form of fantasy? Greek Mythology, for example, is considered fantasy fiction today. But at one time, people actually worshiped the Greek Gods. Since magic and mysticism seem to derive from religion, it makes sense to add a religious element when writing a fantasy novel.

Religion is a Part of Every Culture
Whether one is atheist, Christian, or Muslim; American, Chinese, or Pacific Islander, religion is a part of our everyday lives. Even followers of the scientific theories are a form of religion. Even though a fantasy world is a make-believe world, it has to be believable. A world without religion of some kind, even a made-up kind, might not feel right to a reader.

Religion Creates Tension
Because of religion, we have had many very interesting events in history. Religion has caused wars like the Crusades, persecution like witch hunts or the Jewish Holocaust, dissention like the religious debate and split between Greek Orthodoxy and Latin Catholicism, fanatics like the Kamikaze or our modern terrorists. Using our own history as an example, we can use religion in writing a fantasy novel to create interesting characters and tension.

Religion Gives Hope
Religion doesn’t have to be all bad. While there are people in our own world who use religion as an excuse to do evil things, not all religious people are like that. Some people see religion as a way of restricting their lives while others see it as a way to make sure they do the right thing. And when certain religious people face hardship, it may be easier for them to get through it because of their faith. Religion can give hope to a character or mythical society. And religion can be a way for your character to lead a moral life. Religion does not always mean a church with priests, but it can.

Religion in Good vs. Evil
When writing a fantasy novel, your religion can either be good or evil. Even if your faith lies with Christianity, you have to admit that people have used the name of God to do things that are wrong. Is your character fighting against a corrupt religious institution? Or does his moral acts follow the ideals of his professed religion?

Is Your Fantasy Novel a Story or are You Sending a Message?
Be careful when writing a fantasy novel to not make your story a religious debate. Don’t let your personal beliefs interfere with the story you are trying to tell. Unless the intent of your fantasy novel is to create controversy, you don’t want to deviate from the plot or make someone put down your book in disgust because they don’t agree with your thoughts. No one likes to be force-fed someone else’s beliefs. When writing a fantasy novel, make sure the opinions regarding religion in your story are the opinions of your characters. Try to not to make your characters preach.

Almost every good fantasy novel has a religious element to it. Terry Goodkind’s “Sword of Truth” series shows different cultures with different religious practices. While the main character supports thinking for oneself, it can’t be denied that the spirit world is real. Brandon Sanderson’s “Mistborn” series shows a corrupted religion with the Lord Ruler and one of the characters studies all religions and supports them as an outlet for hope. Even George R. R. Martin’s “Song of Ice and Fire” series, which is mostly a story of politics and warfare, has elements of religion. Remember that Queen Cersei is taken prisoner by religious fanatics and Arya joined an organization of people who can change their faces. What will be the religion of people in your fantasy novel?

I know this book “Mistborn” by Brandon Sanderson has been out for some time, but I hadn’t been reading many fantasy novels. After being left hanging with George R. R. Martin’s “A Dance with Dragons”, I needed a fantasy fix to keep me going. After browsing on Amazon.com, I saw that “Mistborn” had been a popular choice amongst fantasy readers so I checked it out.

I was pleasantly surprised. At first I was put off by the use of magic by people drinking metal chips, then ‘burning’ the metal in their body to various affects. To make magic in this way seemed a bit absurd to me, but Brandon Sanderson does a great job of making it believable. Less than a quarter of the way into the story, I was completely absorbed into Brandon’s new world of Allomancers.

The main character, Vin, is very compelling. She lives in a tenuous world of thieves where her  race is considered inferior and trust is a foolish gamble. While she acts weak for the sake of her safety, her character is strong. When a con being performed by the band of thieves she lives with goes wrong, another compelling character appears. Kelsier is unusually optimistic for a man from the same inferior race as Vin. This race, called skaa, has lived as slaves for a thousand years. They are generally a depressed lot who live only to survive. But Kelsier is no ordinary skaa. He is the Survivor of Hathsin and a Mistborn who is determined to overthrow the Lord Ruler.

Vin discovers through Kelsier that she is also Misborn and her abilities to burn various metals is a rare and exciting gift. At first, she helps Kelsier and his band in their plot to overthrow a thousand year reign only to learn more about her gift. But while she doesn’t really believe that their crazy plot will work, she begins to believe in trust and what true friendship really is.

Reading “Misborn” by Brandon Sanderon was a fantastic adventure. Each page brought me closer to Vin and her developing powers, Kelsier and his reckless schemes, and to the amazing end to a world of injustice. And although Brandon nicely wrapped up the plot in “Mistborn” there is a hint that the story continues. The story of “Mistborn” does no leave you hanging, but it does compel you to read the sequel, “The Well of Ascension”.

If you enjoy fantasy novels from popular modern fantasy writers such as Terry Goodkind, Robert Jordan, R. A. Salvator, David Eddings, Margaret Weis & Tracy Hickman, Brent Weeks, and Terry Brooks then you will love the “Mistborn” series by Brandon Sanderson. Check out the first book in the series, “Mistborn“, or get all three – “Mistborn”, “The Well of Ascension”, and “The Hero of Ages”.

(Is it just me or does the girl in the book cover art, Vin, look a lot like Shannen Doherty?)

Mankind has been imagining magical creatures for millenniums. While today’s genre tends to stick with the most common dragons, elves, fairies, and vampires, perhaps you can spice up your fantasy novel with something a little more exotic. Going through the magical creatures in the “The Element Encyclopedia of Magical Creatures” gave me a bunch of great ideas.