About the Dragon Spawn Chronicles 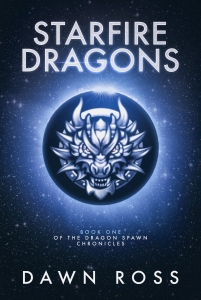 StarFire Dragons: Book One of the Dragon Spawn Chronicles, now on Amazon.

How many of you struggle to overcome a trauma-filled past? Not only do people like us have to carry an excessive amount of baggage, we may also have misaligned beliefs, suffer from mental disorders such as anxiety or depression, fight strong desires to engage in self-destructive behavior, or face other issues that make it difficult for us to be better people. And perhaps we are still surrounded by poisonous people: people who make us feel guilty for wanting to change, people who tempt us into falling back into our negative behaviors, or people who put us down and tell us we are incapable of change.

People like us need heroes. We need good people to help us. We don’t just need them to protect us. We need them to give us a hand up—to give us hope and confidence, to point us down a better path, and to show us how to be strong so that we can be our own hero.

The primary character in the Dragon Spawn Chronicles wasn’t born a hero. Like us, he comes from a traumatic past. Like us, he struggles within himself. And like us, he needs good people in his life to show him a better way to live.

Jori is a ten-year-old boy from a savage warrior-based society. He was bred to predominate and trained to kill. As such, he’s seen more and experience more violence and death than most of us will ever have to face in our lifetime.  He’s been told subjugation of the weak is his birthright, that emotion is weakness and sentiment is for fools. He wants to believe these things and tries hard to live up to his father’s high expectations. But then something happens to challenge his beliefs.

StarFire Dragons: Book One of the Dragon Spawn Chronicles begins when Jori’s ship crash lands on an uninhabited planet. He is rescued by those from an enemy ship. Rather than being taken prisoner, though, he is taken in and treated fairly. Commander J.D. Hapker promises to handle this angry hateful child with compassion and understanding. It’s not easy, especially since other crewmembers believe Hapker is a fool for helping this murderous little dragon spawn. For every bit of progress Hapker makes, something happens to intensify the situation. He doesn’t give up, though. Whether things end well between Jori and Hapker doesn’t matter. What matters is that Hapker has been a positive influence. A good seed has been planted.

The Dragon Emperor: Book Two of the Dragon Spawn Chronicles will be the flip side of Book One. Instead of Jori being treated relatively well on Hapker’s ship, Hapker will be treated harshly as a prisoner on Jori’s father’s ship. Just when Jori thought he was sure of his duty to his warmongering father, Hapker comes along again to challenge his beliefs. Will Jori go along with his father’s plans of destruction and domination? Will he succumb to the darkness and perpetuate a cycle of violence and hate? Or will he finally acknowledge that his father’s way is wrong? And if he does decide his father is wrong, how can he—a mere boy—go against him?

More books in the Dragon Spawn Chronicles series will follow. Jori will face gypsy cyborgs, a human who’s managed to upload his consciousness into a digital network, a culture that has learned how to phase through solid objects, and more. He will visit an oxygen-rich planet where insects are much larger, a planet whose people live in the sky rather than on the surface, a double-planet that is being torn apart due to its co-orbital configuration, and so on. Jori will have something to learn in each of the stories. He won’t just be struggling against external threats. He will struggle internally between the temptation to be like his father and his desire to be a better person. It won’t be easy—but overcoming our past never is.

StarFire Dragons Prequel – If you’d like to read the prequel to StarFire Dragons, sign up for my email list. Shoot me an email to let me know you’ve signed up and I will send you a PDF of the 5,000+ word document. My email address is indicated in the right-hand column.

Read More – If you’d like to read a little bit from StarFire Dragons and The Dragon Emperor, click the Sci-Fi Part 1 and Sci-Fi Part 2 links under the Categories heading in the right-hand column. Keep in mind that these excerpts are rough drafts and that many parts of the published story have changed since these blog posts were written.

If you want to read the first novel, StarFire Dragons, click the image above to be taken to Amazon.