Do You Really Have to Kill Your Darlings? 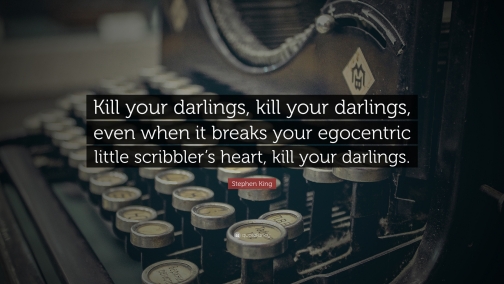 First of all, what are darlings? To writers, the term is used when referencing a piece of the story or a character that the author loves but really has little to do with the story itself. The advice you’ll hear from many writing experts is that you need to kill them, murder them, or to put it simply, get rid of them. Take them out of your story.

The problem I’ve encountered more than once is the assumption that they always have to be killed or gotten rid of. This is not always true. After all, if you as the writer love some element of your work, why should you get rid of it? For example, you really love a certain character but he or she doesn’t really add value to the story. How about changing your story or your character a bit so that they do add value to the story?

I read that when Hei Hei the rooster was originally written in the story of Moana, he was a cranky and proud rooster (http://disney.wikia.com/wiki/Heihei). But his part in the story really had no purpose other than to be annoying. So the writers had to rewrite him or he’d be cut. Hei Hei is a much different rooster now. He’s also a more important element to the story—he’s a source of comical trouble. Perhaps the character in your story won’t need such a dramatic change in character. Maybe he or she just needs a more dramatic part. And if, after trial and error, you just can’t make this character fit into the story, then you can reconsider eliminating them (or save them for another story). The same can be said for certain scenes or other parts that aren’t contributing to the story.

You might be told that you shouldn’t try to force it. This could very well be true. So ask yourself why you want to keep this darling in your story. Is it because you worked so hard on it and it seems like a waste to get rid of it? Sorry. This probably isn’t a good enough reason to keep it. Is it because you really like it? If it doesn’t fit in your story, save it for another story. Or is it because you think it’s an important part of the story? If you think it’s important but your professional critiquers doesn’t, try to figure out why. Then consider changing things so they see the importance too.

You are the Writer

Ultimately, though, it’s your story. Don’t let a strong critique force you into doing something you don’t want to do. Don’t be pressured or let your critiquer make you feel stupid when you say you don’t want to change this or that and the critiquer responds, “Ugh. This is why I hate little darlings.”

Consider All Your Options

There is nothing wrong with keeping something or some character you love in your story. There’s nothing wrong with wanting the story to end a certain way because you plan on writing a sequel. If the person or persons critiquing your story think a certain element or a certain character is useless and should be gotten rid of, consider their advice seriously. But consider all your options. There’s more than one way to do something.

It also helps to get the advice of more than one professional writer. This way if everyone is saying the same thing, you know the critique is valid and not just an opinion. Critiques are invaluable in that they can help you become a better writer. But the line between critique and opinion can sometimes be blurred.

What are your feelings or opinions on “darlings”?